During this time of year, things happen that are often surprising and heart-warming.  Sometimes when you plan on a great gift for someone else, it becomes a gift for you, as well.

It all started when my daughter, Jen, fell through the ceiling.

Yes, I’m serious.  She was in the attic getting some stuff down and took a wrong step, literally through the ceiling of her son’s room.  Long story short, that fall damaged a few things, one of which was a photograph of the dog she grew up with:  Jessie, a gorgeous German Shepherd who was the best dog I’ve ever had.

My all-time favorite photo of Jen is a pic of her on the floor in my kitchen dressed in pj’s with her arm around Jessie on the first day we had her in our home.  Jessie was about 8 weeks old, one ear up, one ear down, huge paws, tongue hanging out.  They bonded in that moment and after that, they were best friends.

When Jessie passed at the age of 19, Jen fell apart even though she hadn’t lived at home for years, but that dog was like the sister Jen never had.  Jen’s fall scratched up the portrait of Jessie at her best, sitting under the apple tree in our Vermont backyard.

I took the portrait from Jen, who asked me to get it fixed somehow.  She had a tear in her eye as she relinquished the photo.

My friend, Deborah Bradsher, is an artist who normally sketches houses for homeowners, but she’s done a few animals, so I asked her if she could create a pencil drawing of Jessie.  She took on the project with a promise to “try.”  I told her I wanted to give the sketch to my daughter for Christmas.

When Deb finished, we met for lunch in downtown Durham, where she shared the sketch with me.  It was wonderful!  Jessie came alive on that page.

But even better than this gorgeous portrait of Jessie . . . Deb pulled another portrait out of her bag, one I didn’t expect at all . . . a portrait of Izzy!

This was a huge surprise that I absolutely loved!  Just like she had with Jessie, Deb brought Izzy to life.  His eyes are perfect, and the look on his face is one that I see all the time.

I told Deb that she could sell these portraits, and she’s so modest that she doubted whether anyone would buy one.  I’m determined to prove her wrong, so I’m posting her information here.  If any of you dog lovers want a portrait of your baby, this is the artist for  you!

We celebrated Izzy’s fourth birthday quietly last week.  Just the two of us.  I don’t think he even knew it was a celebration until I brought out the new bone.  It took him about five minutes to eat it.  So much for that.

I’m not the kind of person who usually celebrates dogs’ birthdays.  I mean, I know generally when my animals were born, but I’m not going to make a cake and have a party and announce the day to the world.  Dogs don’t care.  Cats care even less.  But Banfield (where Izzy goes to the vet’s) sent me an email to tell Izzy “Happy Birthday,” and that kind of got me started thinking about the day, the time that has passed, and the many changes Izzy has gone through during the past three years (he came to me when he was 9 months old, so I don’t count that first year in “our” memories).

He spent his first year with very little human contact, which is probably why he loves other dogs so much.  They were his companions until he came to live with me.  In fact, he was so poorly socialized that I didn’t have to pay for him.  The person who ‘sold’ him to me knew that he would be a challenge, and she was right.  “You can have him for free,” she told me, “as long as you promise to work with him.”

I did.  But I didn’t know how difficult it would be or how long it would take for him to trust humans.

For the first three months, Izzy would not come near me.  I couldn’t pat him, and when I forced him to sit in my lap or to let me touch him, his body stiffened and he pulled as far away as he possibly could manage.

I’m not quite sure when that changed, but finally, he found his way to my lap to ask for love and would look at me directly instead of in a sidelong fashion.

It took a lot longer to habituate him to other people.   He loved dogs much more (and still does).

My next door neighbors are the ones I credit with socializing Izzy.  Deb and Danny never gave up, constantly talking to Izzy, sitting on the ground in order to touch him, and going for walks with us so that he would “feel” their presence.  It worked.  Three years later, he still gets excited when I mention their names, and when Deb came to visit us in this new house a couple of weeks ago, Izzy tried to turn himself inside out to get to her.

Still, when someone new comes by, he will jump and bark.  My new guy, Louis, is a bit frustrated by the fact that Izzy doesn’t want Louis near me, but we’re working on my four-legged friend.  Giving him treats when he sits quietly works most of the time and reminding him that he’s a dog who lives with humans rather than vice versa works, as well.  But it’s a work in progress.

I wish Izzy understood that dating is difficult as it is, and he’s making it even harder.  Thankfully, Louis is going to stick around for a while and knows that Izzy is “family,” so he (Louis) has to figure out how to get this stubborn little Shichon to chill out a bit.

After I got Izzy, I had the opportunity to rent a little bungalow five minutes from work, so we moved–which was probably the best thing I did because Izzy didn’t do well alone in my apartment all day. 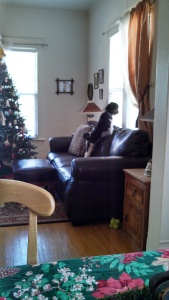 I kept a journal of our first year in Roxboro, and I’m now working on rewriting it, making the story more of a narrative that might someday find its way into a publisher’s catalog.  Rereading that work reminds me of how much Izzy has learned since arriving in a crate to the Raleigh-Durham airport one hot early summer’s day.  He has gone from being terrified to get out of the crate and say hello to “owning” his new house and making friends with all of our new neighbors.

He especially adored Ellie (and her human, Peggy), always perking up his ears whenever I asked him if he wanted to take a walk to see her.

It’s been an uphill battle for this first four years, but I’m proud of my little guy, of the commands he’s learned, and the way he has adapted.  We have a mutual love-fest going on that I know will continue for as long as we’re both around.

They say dogs are humans best friends, and I truly agree.  They are also our rescuers, even though we might be the ones doing the initial rescuing.

So, Happy Birthday, little buddy.  And thank you for coming into my life.

On the third of July, Izzy reluctantly climbed into the car with me, and we waved goodbye to Roxboro and to our friends, to the streets we walked in the early hours of the morning, to the job I had for eight and a half years, to my little bungalow and the gardens that bloomed better last week than they have all summer long.  Goodbye for now to Deb and Danny (though I expect them down for dinner soon!) and to Mr. Mendoza across the street (I couldn’t even say goodbye to him before he left for his annual trip to Mexico) and to Ellie and Peggy around the corner.  Izzy will particularly miss Ellie, his best dog friend.

It was a day of mixed emotions for both of us.  Izzy spent most  of the day in the backyard as the guys moved the furniture out of the house.  He barked and ran from one side of the house to the other, straining to see what those strange men were doing in his house, very worried that I was in that house with those strange men without his stalwart protection.

The first night at the new place, Izzy jumped at every noise and when we did our evening walk, he couldn’t figure out which blade of grass to pee on first.  He bristled with senses so heightened that they were almost too much for his brain to handle.  I have to admit my own senses were on tilt, too, and when we crawled into the bed in the new bedroom that night, we both sank into a sleep both deep and confused.

We rose at 5:30 for our longest walk of the day to explore the neighborhood.  New bushes.  The smell of other dogs.  Streets we hadn’t walked before.

Though I had driven the neighborhood many times before moving in, we hadn’t walked the streets, so it was time to learn the neighborhood.  This new place is nice, well-kept, and the neighbors seem to watch out for each other, but I’m amazed that I’ve moved to a place where each house resembles the one next door.  I’ve always said that I want a house with character.  Well, this one only has character because of the “things” I brought with me.  Without the “things,” this townhome would look the same as everyone else’s.  Unless you look closely, this neighborhood is fairly bland.

As we did in Roxboro, we sniff out the possibilities and explore the hidden corners, and on that first walk, we found a little gift:  a walking trail in a cool copse of trees.

There are dogs to meet here, and people, too, and roads to discover, trees to sniff, and adventures to enjoy.  But, for now, we’re tired from unpacking and would love some serious downtime before getting back into the work of being our own boss! 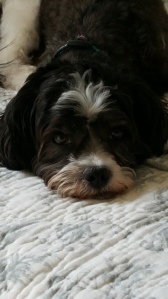 For now, Izzy says he’ll hold the bed down 🙂

(Somewhat) Daily News from the World of Literary Nonfiction

The Writing Life, Books, and Things That Make Me Go, "Ah"

I AM therefore I Write. Official site of Marie A Bailey, writer, knitter, and stray cat magnet.

And, for good measure, a bit of Cooking and Eating

Some thoughts from author and agent Marie Lamba

All the world's an upstage.

The greatest WordPress.com site in all the land!

A Constant Writer and Aspiring Author of Fantasy

Referential: of, containing, or constituting a reference; especially: pointing to or involving a referent

Transform one meal into two with planned-overs